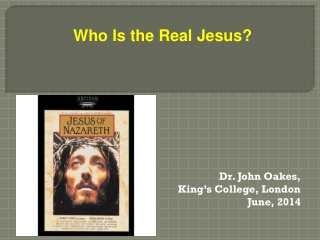 Who Is the Real Jesus?. Dr. John Oakes, King’s College, London June, 2014. Who Does This Man Think He Is? The Claims of Jesus. Sage Prophet Liar Crazy person Messiah Son of Man God in the flesh Legend/Myth Man (ie. mere man) An important religious leader among many. Toom Tabard - . we will be exploring the: d efeat and capture of king john balliol. r easons why he failed as king.

You are King John – are you the weakest link? - . in your group you need to consider how king john should react to