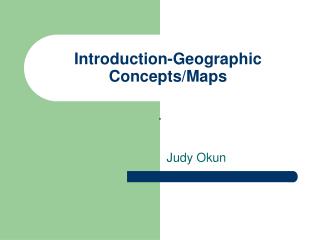 Introduction-Geographic Concepts/Maps. Judy Okun. Geography?. The study of spatial patterns or spatial occurrences on Earth, both physical and cultural The examination of where these patterns exist and why. Five Themes of Geography. http://www.una.edu/geography/statedepted/themes.html. Introduction to Maps - What is a map?. a map is any concrete or abstract representation of the features that occur on or

Introduction to Geographic Information Systems - The objectives of this topic. understand the nature of gis as an

Introduction to Maps - . june 6, 2014. maps defined. a graphic representation of the real world. maps can be used to show

INTRODUCTION TO GEOGRAPHIC INFORMATION SYSTEMS - . goals. answer the question: “what is a gis?” learn some of the

Standard 1: Maps &amp; Other Geographic Representations - No map is an absolute accurate representation of earth.

Introduction to Maps - . what is a map?. we usually think it has to do with just geography map: n, a diagrammatic

Introduction to Geographic Information Systems - . dr. larry teeter. what is a gis?. one of a set. geospatial