Inside the Unconscious Mind of an Author - PowerPoint PPT Presentation 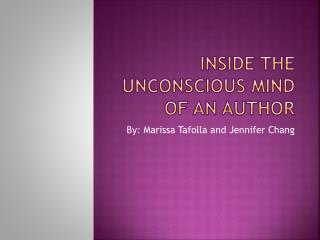 Inside the Unconscious Mind of an Author

Inside the Unconscious Mind of an Author. By: Marissa Tafolla and Jennifer Chang. Key Words. Sigmund Freud: trained as a neurologist; his experience led him to develop a theory of mind that influenced future psychologist.

Inside the Unconscious Mind of an Author Introduction to Psychology - . chapter 1. dr. kerris dillon. what is psychology?.

Sigmund Freud - . the mind in conflict. today’s lecture. brief history of freud’s ‘discovery’ of the unconscious

Can I Use brain research in my Classroom? - . by kharma banks &amp; torrieann dooley. purpose of the presentation. as

Module 5: Dual Processing, Sleep, and Dreams - . the brain and consciousness. psychology began in the 1800's as “the

PSYCHOANALYTIC CRITICISM - Freud and his contribution to literary theory a powerpoint spectacular by c.j. fusco.

Surrealism - . a journey into the subconscious. what is surrealism?. began in the early 1920s rejects logic features the

Introduction to Psychology - . history. where did psychology come from?. the history of psychology. philosophy.

what is consciousness? - . how do i know when someone is conscious? is it enough that information is taken in

Modernism - . 1914-1939 . what is modernism?. modernism is a cultural movement that  includes the progressive art and

Sigmund Freud - Freud formulated one of the most comprehensive theories of human personality ever created. what is

Thinking Question: Day 2 - . we all have an idea of what add/adhd is. hypothesize a potential cause and/or treatment of

Conrad’s Heart of Darkness - . engl 203 dr. fike. handout on modernism. be sure to read the handout i sent on