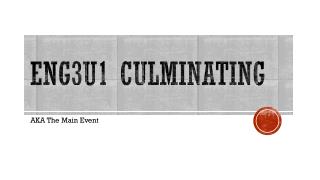 ENG3U1 Culminating. AKA The Main Event. The Brass Tacks. The following are the required elements of your culminating activity: A reader’s diary (8 entries, one page each, process of reading and gathering ideas)

Subtraction Story Problems - . by the eca first graders october 2012. this is the culminating activity to our story

What exactly is PYP exhibition? - . an overview for parents fernway school january 9 th 7-8 pm. what?. culminating

REVELATION CHAPTER 20 - The revelation of jesus christ. “ the king of kings rules and reigns!”. revelation chapter

The Extended Essay What is it? Deadlines/Calendar Sample Topics EE Wiki - . what is the ee?. the extended essay is an

Lesson Development Part 3 Where are we and where do we go from here? - . how many characters did the jogger turn into?.

Weapons of WWII - . by: luc manuel and jacob vance. world war ii was the largest armed conflict in history, spanning the

Culminating Project - . name and objective of this presentation:. the four guiding questions…. these questions will be

The PYP Exhibition - Desired outcomes. short introduction of the pyp exhibitionrole of parents/guardians in the