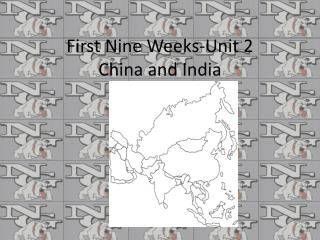 First Nine Weeks-Unit 2 China and India. Gandhi’s main strategy for dealing with unfair British laws was to have his followers do what?. Non- Violent Protest. Leaders from the same family. Dynasty. What was the nationalist government of China called?. Kuomintang. First Nine Weeks - . exam review. desalination is the process of taking salt out of __________ and using it for drinking

Unit 2 Review India and China - . who was the first emperor of the mauryan empire?. chandragupta maurya. which continents

Vocabulary Review for the First Nine-weeks - . kuczek-ghs-english ii-2012. there are a total of 40 questions. 30 word

Study Guide for First Nine Weeks Test - . 1. a is a definition that changes to accommodate new information. w