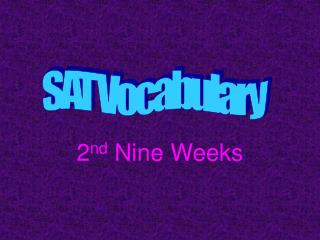 SAT Vocabulary. 2 nd Nine Weeks. abhor. VERB. Definition: To regard with extreme repugnance; to detest utterly; to loathe. If there is one particular food I abhor , it is canned apricots. Use this word in a sentence. Accolade. noun. Definition: praise; an award. First Nine Weeks-Unit 2 China and India - . gandhi’s main strategy for dealing with unfair british laws was to have his

NORMAL PUERPERIUM Presented by: Dr. Ahmed Al Harbi OB - . puerperium is defined as the time from the delivery of the

2 nd Six Weeks Review - . pronouns and antecedents. the book is not as difficult as its first chapter suggests. the

PRETERM LABOUR PREMATURE RUPTURE OF MEMBRANE - Labour that occurs after 24 weeks but before 37 completed weeks,although