When something bad happens to you how does it effect the people close to you? - PowerPoint PPT Presentation 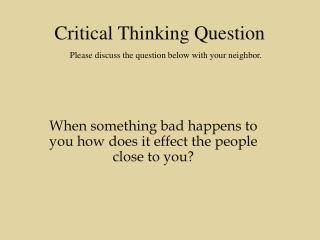 When something bad happens to you how does it effect the people close to you?

1 / 14
Download Presentation
When something bad happens to you how does it effect the people close to you?
77 Views

Critical Thinking Question Please discuss the question below with your neighbor. When something bad happens to you how does it effect the people close to you? . The “Great Recession” Today. United States Net Worth—by Households. Industrial Production--USA. I NTERWAR YEARS.

When something bad happens to you how does it effect the people close to you?

bad side effects of marijuana - When using marijuana for medical or recreational purposes, most people do not take time

bad effects of marijuana - How long does marijuana stay in your system? it is sometimes really funny when experienced

Why do good things happen to some people, and not to others? Karma - How do i know what i am supposed to do in my life?

Why Good People Do Bad Things - . thesis. the capacity for doing bad or even evil things can be explained (in part) by

Fate vs. Luck - . this web quest is created by: ansha clement.

Depression - . wyatt &amp; josh. what is

Littering - . by nuwin fernando. cause and effect. cause is that people are littering. effect is that many of the

What was the most significant effect of the Black Death ? - . starter: look at the art work here. can you guess who the

Literary Terms - . by: spencer mendible. what you will be learning……. the definitions of the terms satire and

How To Deal With Bad People - . rom 12:17-21. introduction. have you ever tried your best to get along with someone but

Peer Pressure - . bellringer :. who influences the decisions you make?. positive influences can encourage you to improve

How and why do things happen? - . things never just happen…. what do we mean by this? see if you understand from this

Ghosts from a failed system - Westborough state hospital, formerly known as the westborough insane hospital, was built in