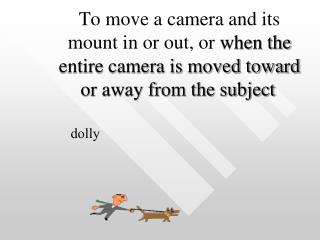 To move a camera and its mount in or out, or when the entire camera is moved toward or away from the subject. dolly. ---- is a close-up of something within the scene. For example, after a man looks at his watch, you might see a cut to close-up of the watch where you can clearly see the time.

LEARNERS STYLES Dolly Ramos Gallego - . the way one approaches a problem , learns or oragnizes a combination of feelings

Hello Dolly, Well, Hello Dolly: Dolls as Unit of Study A School-wide, Integrated, - World-view of the doll. presented at

Dolly Parton - . by: krista jameson. fun facts. her favorite color is pink. her middle name is rebecca. she has won 7

DOLLY FOUNDATION IN Collaboration WITH Wildaf Ghana and world views vision - . registeration of new born into the Dolly Parton - . by: madeline desautels. who/what was her inspiration?.