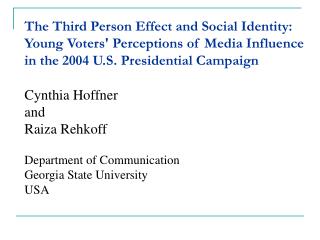 Astrojumper : Effect of First Person versus Third Person Point of View - . by: emily hudson. a long, long time ago, in a

Third Person Actions - . r. turnage spanish tutorials. before we begin…. the following presentation will be done like

Third Person ‘s’ - When it’s happening now. third person ‘s’. s. this means putting an ‘s’ at the end of

Third Person POV - . third person pov. this is the most complex pov the narrator is a disembodied intelligence who does

Modes of Third - Person Narration - Copy all the notes on the left hand side of your notebook. begin your note taking

The third-person perception as a self-preserving mechanism - Explaining tpps. the prevailing explanation is that the

First and Third Person Point of View - . attach the windows and the curtains to the page . the curtains should open.

The Person - . part one. theoretical approaches. without the individual there would be no society and without society

The Person - . part ii. critical phases of the life cycle. primary attachment in the parent-child dyad – the first

The Effect of Font Size on The Way a Person Memorizes The Text - . by: suzie yoon. have you ever been trying to memorize

Journalism 614: Opinion and Perception I: Third-person effects - . concerns about the media. various categories of media