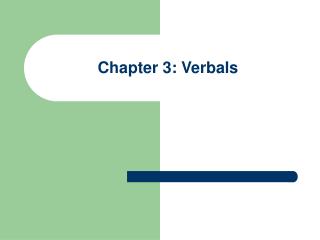 Chapter 3: Verbals. What is a verbal?. A form of a verb that performs the function of a noun, adjective, or adverb. Ex. Running is good exercise Running is a gerund, subject of the sentence Ex. Running swiftly, he caught the thief Running is a participle, modifying “he” Verbals - . participle. a participle is a verb form that is used as an adjective. i’m having an identity crisis. verb.

Verbals - . verbals are verb forms that are being used as other parts of speech. they are not expressing the actions of

Verbals - . verbals are verb parts that act like nouns, adjectives, or adverbs, but they cannot stand alone as actual

Verbals - Note: not everyone considers this to be its own part of speech. verbals. what are some words ending in – ing

Chapter 7: Verbals - . 7 th grade language arts. lesson 1: gerunds. a verbal is a word that is formed from a verb and

Verbals - . gerund. infinitive. participle. verbal phrase = . a phrase that is centered around a verb form . this verb

VERBALS - . oh how fun! . definition. verbal is a verb form used as another part of speech types of verbals 1. gerunds 2

Verbals!!!! - . 8 th grade. in your ibook, create a frayer diagram! as we go through the power point, take notes. what

Verbals - . infinitives, gerunds, participles. infinitives. remember: -the word to plus a verb -can function as nouns,

Verbals - . gerunds and participles. a gerund is a verbal that ends in - ing and functions as a noun. the term verbal

verbals - . by alexis kitchens. verbals. a verbal is the form of a verb used as a noun ,adjective or adverbs. a verbal is