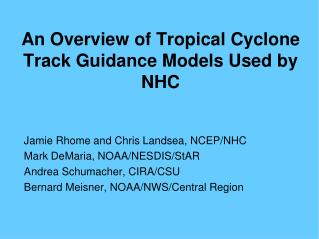 Tropical Storms - . what is a tropical storm?. a severe depression. wind speeds reach over 60 km/h but can reach over 200

The Joint Hurricane Testbed and the Visiting Scientist Program at the National Hurricane Center - . 8 december, 2008.

Munehiko Yamaguchi Typhoon Research Department, - Topic no. 5 on the relative benefits of multi-center grand ensemble for