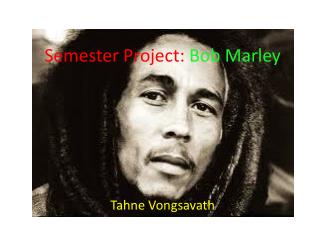 Marley &amp; Scrooge By Kyal Macdonald - . similarities. businessmen they both knew each other. they went to school

THE BOB MARLEY EXPERIENCE (; - . when did it all happen?. on february 6 1945, the jamaican singer-songwriter and

BOB MARLEY - . and his influence on popular culture. bob marley wanted to make jamaica a better place as a whole and for