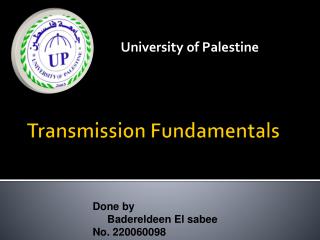 University of Palestine. Transmission Fundamentals. Done by Badereldeen El sabee No. 220060098. Electromagnetic Signal. Function of time Can also be expressed as a function of frequency Signal consists of components of different frequencies. Time-Domain Concepts.