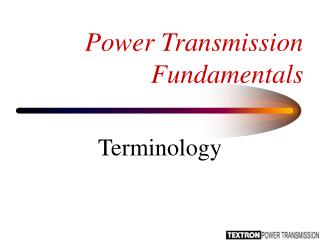 Power Transmission Fundamentals. Terminology. Gear System Characteristics. Gears are used to reduce the speed by a known ratio. Reducing the speed increases the torque. The efficiency is less than 100% so the power output is smaller than the power input. Motor Speed.

Fundamentals in the Sentence Writing Strategy - . note: these slides are intended to be used as supplemental materials