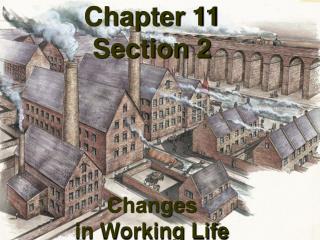 Chapter 11 Section 2 Changes in Working Life. 8. What was the Rhode Island System?. 8. Workers’ Lives. Rhode Island System- practice developed by Slater of hiring families to work in mills and then dividing the work into simple tasks (so simple even a child could do it). 8.

Section 2 – Heat Stress and the Firefighter - . after completing this section, the firefighter will be able to:

CHAPTER 5: CHANGES ON THE WESTERN FRONTIER - . section 1goals and objectives. upon completion,students should be able to:

Ch. 11: Stress and Coping - . stress is a person’s response to events that are threatening. stressful events can

Choose to view chapter section with a click on the section heading. The Physics of Water - How water physics affect

Chapter 30 Section 2 - . the vietnam war. map of vietnam. vietnam is located just south of china, in the area that we

What was life like for children working in the textile mills in the 1800s? - . learning objective:. to understand what

CHAPTER 10 SECTION 2 THE HOME FRONT - . before the war the federal government played a minor role in the daily lives of

CHAPTER 11 Cash Flow Estimation And Chapter 12 Risk - . need to be in class for this ch. relevant cash flows new