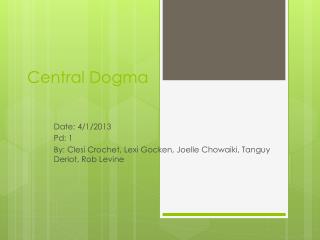 Central Dogma. Date: 4/1/2013 Pd : 1 By: Clesi Crochet, Lexi Gocken , Joelle Chowaiki , Tanguy Deriot , Rob Levine. Chapter 12 vocab. 12.1 Transformation: the process in which one strain of bacteria is changed by a gene or genes from another strain of bacteria.

From DNA to Protein: (Central Dogma) - . from dna to protein: genotype to phenotype. one gene, one polypeptide dna, rna,

Clinical Research in Central Oregon - . what’s available to you, to our community, and why. tim beard , md bmc. archie

Theme and Central Idea - . identifying the main i dea of literary and informational t exts. what is theme?. theme is the