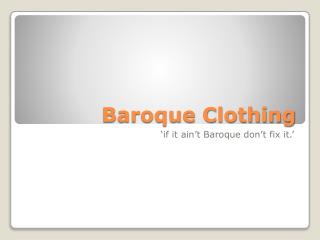 Baroque Test Review - . the test will be held on friday, april 29th. you will need to know the definitions of the

Music During the Baroque Period - . music era timeline. the baroque period. started around 1600 and ended around 1750

Baroque - . rationality symmetrical; use of pyramid in composition stable some use of contrast. emphasis on emotional