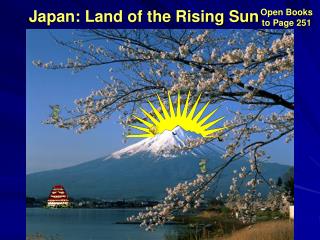 Chapter 20 Japan I - I. there are many active volcanoesearthquakes occur frequentlythere have been 64 earthquakes

The Pure Land Buddhist Temple in Japan - . the phoenix hall of the byodo -in buddhist temple, uji , japan, 11 th -century

Japan - . the land of the rising sun. stuff. japan is an archipelago – a chain of islands. 4 main islands. honshu

THE RISING AND SETTING OF THE SUN &amp; LAND LOSS AT THE EXTREMITIES - . based on the works of harun yahya

The Geography of Japan - . an archipelago – chain of islands. known as “the land of the rising sun”. japan and the

Japan and Korea - . chapter 7 section 1. japan land. japan lies on the ring of fire. they endure earthquakes and