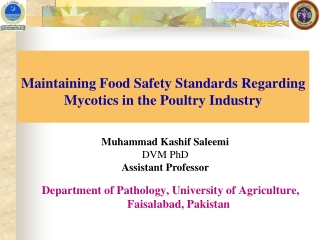 Food Grading and Food Safety - . in canada. what is food grading?. designed to improve food safety graded according to

Chapter 6 Meat, Poultry, and Seafood - . grades of meat. meat inspection is mandatory in the united states. it ensures

NAI : THREAT TO THE POULTRY INDUSTRY IN RSA - . the poultry industry (mainly chickens) is the biggest single agricultural

Regulation of quality and safety of foods - Should be observed first before joining any of the food industry.

The Advantages of Food Safety Training for Food Businesses - To ensure food safety within the workplace, business owners

Processed Poultry & Meat Market driven by India’s livestock wealth which is growing at 6% per annum. - Hectic

Momentum Systems: Why Food Safety Management System is Useful For You! - With so many intermediaries between food