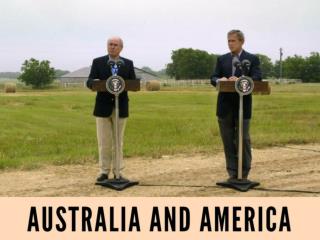 A look back at the close ties between traditional allies Australia and the United States. Australia and Northwest America - . thesis. the tribes of native america were far more ‘ civilised ’ than their

America and Latin America - . by: criste chapman. 1823. 1823: the monroe doctrine declares that latin america is within

America and Latin America - . by: criste chapman. 1823: the monroe doctrine declares that latin america is within the

America and “Holocaust” - . popular and scholarly discourse/knowledge pre- and post- the miniseries. popular

Imperialism and America - . section 18-1 pp. 548-551. preview questions. what were the major factors that contributed to

America and egypt - . lande brittany jennifer. food in america. in america we eat popular food such as hotdogs and

WWI and America - . the draft. 1917: selective service act gave the president the power to draft men into military

Isolationism and America - . mr. vanderporten contemporary american history. what is isolationism?. a policy of remaining

America and wwii - . chapter 12. sec.1 wartime america. after the invasion of poland fdr increased the # of soldiers in

Imperialism And America - . by khadija and keshia. what three factors spurred american imperialism?. desire for military

Obesity and America - . by:katie satterlee hcm 3010. introduction how much has obesity risen over the years? - half of