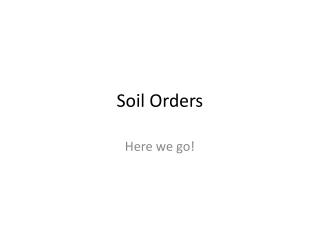 Soil Orders Study Guide – Part I - . these slides are to help organize in your mind: key diagnostic features for each

Partial Orders - . definitions. a relation r on set a is a partial order if it is: reflexive antisymmetric transitive. a

Holy Orders - . priesthood &amp; priesthood . common priesthood of the faithful all the baptized are initiated

Job Orders - . part ii: guidelines for writing job orders. job order entry. can be self – entered by employers an alert

Confirming Orders - . (after-the-fact orders). definition of a confirming order. a purchase, letter of intent to

Religious Orders - What do call a bear with no ears? b! where do cows go on saturday nights? to the mooo-vies!. religious

Purchase Orders - . student activities office. what is a purchase order?. it is proof of mit’s commitment to pay an

Unverified Orders - . what are they? how do they get to be unverified? what do i do?. introduction. verifying unverified