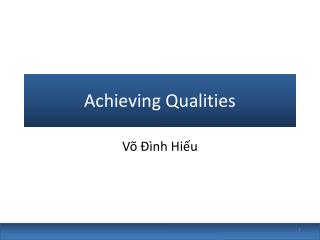 FUNDAMENTALS OF NURSING - . nurs 102 2 credits. objectives. by the end of the lecture student should be able to: define

“Whose Leader Are You?” Leadership qualities required of today’s - Enrollment.mst.edu. “whose leader are you?”

What is Character - At the table you will find papers with descriptive words of personal attributes. while you are

Parody: A humorous, exaggerated imitation of another work. - Allegory: a story in which the characters represent abstract

5 Qualities a CA Students Must Have - Preparing for the big exam by just covering the ca-cpt syllabus is not enough. a

Architectural Tactics and Patterns - . an architectural pattern is is a package of design decisions that is found