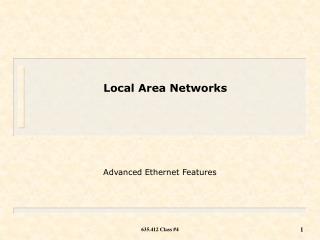 Local Area Networks. Advanced Ethernet Features. IEEE 802.3 Family of LAN Protocols Advanced Features. Introduction Along with order-of-magnitude increases in speed and the application of switching to Ethernet, there are a number of advanced features that have been developed Uniflair pCOWeb Ethernet interface card - . introduction. pcoweb is an ethernet card that interfaces the latter with the

Advanced English - . lesson one. face to face with hurricane camille. lesson one. aims. to know the writing technique of