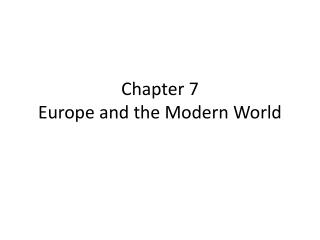 Chapter 7 Europe and the Modern World Chapter 7 Europe and the Modern World. Introduction. Why have European descendants had such a large impact on global development? Advantages in Europeans descendants have established what we know as modern Rise in agricultural production Currency-based trade

Chapter 7 Europe and the Modern World

How to create growth: The benefit of economic freedom to citizens in Europe and around the world - . prof. edward peter

“WHY EUROPE” INQUIRY - . why was it europe, and not anyone else who explored and conquered the rest of the world?.