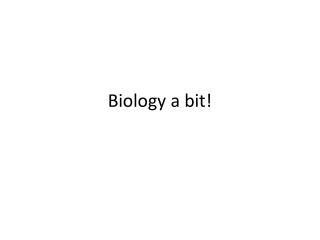 Biology a bit!. Cell . The principal components of a cell are the nucleus as control center, the cytoplasm containing vital substances, and the surrounding membrane as a porous cell wall. A Bit of Review… - . as sung by dr. richard alley the pennsylvania state university. a bit of review: almost everything

A Bit of background - . california passed charter school enabling legislation in 1993 the ambition was to introduce

A bit about Neil…

A bit of History - Creative drama: developing the skills of imagination, and spontaneity. it is about the process (the

Bit by bit - Why are certain cultures more apt to destroy or care about the environment? think of english settlers v.