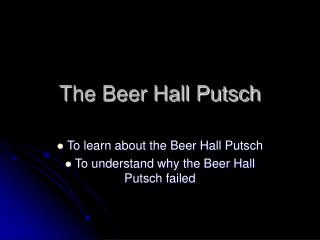 What do the pictures represent about the problems in Weimar Germany? - . end of ww1. spartacists. hyperinflation.

Was the Munich Beer Hall Putsch a success or a failure? - . learning objective – to assess the impact of the munich

Beer Basics - . beer and the civilization of man. brewing can be dated back to at least 7000 bc. many archeologists

Jeremy Hall Block - . case design. beer stein is a beer container with a handle and hinged lid. the lids added were

Beer Advertisement - By: tim and steve . beer advertisement. learning objectives. students will be able to see how the