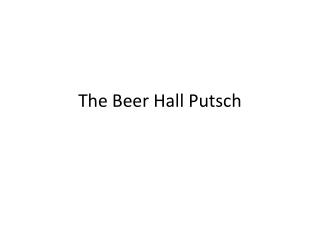 The Beer Hall Putsch. By 1923, the Nazi Party had over 70,000 members and was a significant force in Bavarian politics. Included in this were the 15,000 member of the Sturm-Abteilung or SA. The SA. Private army of the Nazi Party, attracted ex- Freikorps members.

Find out best range of wine and whiskey near you - Best wine store for buying best quality wine, beer, whiskey and other

Parity and the JLab 12 GeV Upgrade: The Program for Hall A - . hadronic and electroweak physics moller and dis parity.

Functional Compositionality - . some linguistic forms are elemental, i.e. they cannot be broken down into more basic