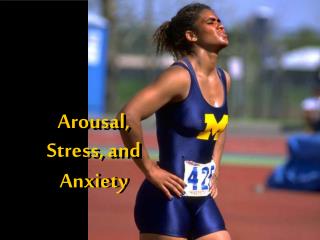 Arousal, Stress, and Anxiety - . arousal, stress, and anxiety. is arousal the same as

AROUSAL, ANXIETY AND STRESS - . arousal is a general physiological and psychological activation, varying in intensity

Anxiety and arousal - . by mahlea and will . trait

Anxiety and Arousal - . arousal. arousal is a state of mental and physical preparedness for action (davis, bull, roscoe

AROUSAL and ANXIETY in SPORT - . what? me worry?. arousal. “arousal is the degree of activation of the organs and

Arousal/Anxiety Management Strategies - . october 8, 2002. levels of optimal arousal. why are these so important? typical

Stress and Anxiety - . anxiety. a negative emotional state characterised by nervousness, worry and apprehension and

STRESS and ANXIETY - . what is stress?. stress is a mismatch between the demands in our lives and the resources we have

Stress and Anxiety - . anxiety. a negative emotional state characterised by nervousness, worry and apprehension and

Stress and Anxiety! - . what is stress?. physical, mental, or emotional strain or tension a specific response by the body

Stress and Anxiety - . p3. stress. wingate (1982): “any influence that disturbs the natural equilibrium of the body”

Stress and anxiety therapy - Feeling more stress than required can exhaust all the positive energy in your life. do you