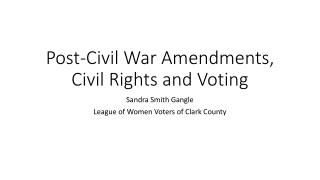 Post-Civil War Amendments, Civil Rights and Voting. Sandra Smith Gangle League of Women Voters of Clark County. 14 th Amendment – 1866-1868. Sec. 1 “All persons born or naturalized in the United States . . . are citizens of the United States and of the State wherein they reside. Civil War, Reconstruction, and Voting Rights - . lead up to the civil war northern and southern states split over the

Civil war Amendments - . furthering civil liberties. 4. components of 14 th amendment : - a citizen is anyone “born or

The Civil War Amendments - . three additions to the constitution during reconstruction. the 13 th amendment (1865).

Civil War (Reconstruction) Amendments - Some of the rights in the bill of rights and in the original constitution, were

The War and Civil Rights - . main idea. nazi theories of racial superiority heightened awareness of racism within the

Post-Civil War Questions - . military history . what would the end of the civil war bring?. the united states had: s

Post Civil War America - . problems, issues, and interpretations. dbq. in what ways and to what extent did constitutional

Post Civil War America - . immigration, industrialization, and child labor. 19 th century immigration to the us can be

Civil Liberties and Civil Rights - . end course by returning to the beginning: freedoms the founders fought for examine