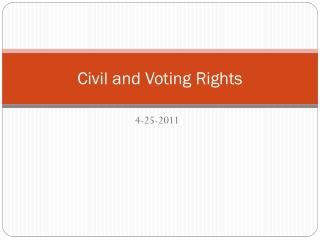 Civil and Voting Rights. 4-25-2011. Do Now. Get your laptop and log on Cell phone out and on the top left of your desk What is an example of a right that is not in the constitution, but is still yours? What amendment guarantees us that right? Quiz and study vocabulary.