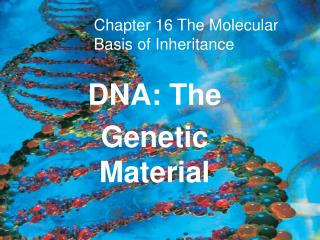 Chapter 16 The Molecular Basis of Inheritance. DNA: The Genetic Material. Intro to DNA Video. http://www.youtube.com/watch?v=bVk0twJYL6Y&feature=youtube_gdata_player. Just a thought…. Make a stack of books totaling about 10,000 pages. That stack of books represents HOW WELL DO YOU KNOW IT? - . turn litmus blue. base. has nucleus. eukaryotic. genetic material. dna/rna. turn litmus red.

Maximizing Genetic Information - The human genome contains about 20,325 genes - however, these encode about 100,000

Genetic Testing - . overview of genetic testing. genetic diseases often depend on the genotype of an individual at a

The Reproductive System - . reproduction. the process by which a single cell duplicates its genetic material allowing it

Microbial Genetics - . genetics – the study of heredity. transmission of biological traits from parent to offspring