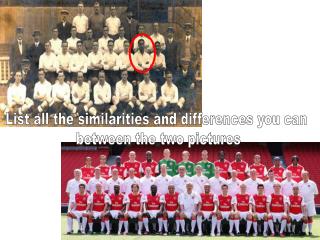 Tottenham Hotspur Football Team for the season 1911-1912. One of Britain’s first black professional footballers, Walter Tull, is seated second from right, in the second row from the front. . List all the similarities and differences you can between the two pictures.

International Planning and Recent Reforms of Anti-Deferral Legislation in Mexico, Canada and the U.S. February 15, 200

The Adventures of Walter the Water Drop