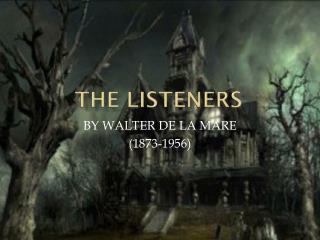 THE LISTENERS. BY WALTER DE LA MARE (1873-1956). The Listeners ‘Is there anybody there?’ said the Traveller, Knocking on the moonlit door; And his horse in the silence champed the grasses Of the forest’s ferny floor: And a bird flew up out of the turret,

Servlet Listeners - . 4.1.0.3. unit objectives. after completing this unit, you should be able to: define servlet

Listeners - . a listener is an event handler that the server invokes when certain events occur (e.g. web application

Listening and Listeners - . ms. chacon speech and debate. “nobody ever listened himself [themselves] out of a job.”

Mouse Listeners - . moving the mouse will also generate events like the timer to have your program respond, you must

UID – Event Handling and Listeners - . boriana koleva (bnk@cs.nott.ac.uk). event handling and listeners. what is an

Noble Minded Listeners - . acts 17:11. these were more noble than those in thessalonica, in that they received the word