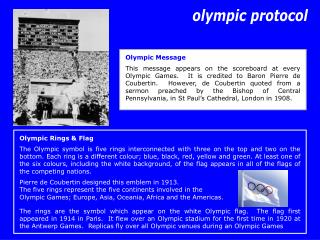 olympic protocol Olympic Message This message appears on the scoreboard at every Olympic Games. It is credited to Baron Pierre de Coubertin. However, de Coubertin quoted from a sermon preached by the Bishop of Central Pennsylvania, in St Paul’s Cathedral, London in 1908. Olympic Rings & Flag

NEWTON’S RINGS - . introduction the formation of newton’s rings is an important application of interference of light

Ecuador - . where in the world is ecuador?. alabama. ecuador. ecuador’s flag. red stands for the blood shed for