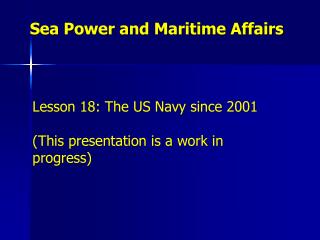 Sea Power and Maritime Affairs. Lesson 18: The US Navy since 2001 (This presentation is a work in progress). Learning Objectives. Comprehend the policy goals of the George W. Bush administration (2001-2009) and their effect on the navy.

Sea Power and Maritime Affairs - . lesson 2 sea power in the ancient mediterranean world, from the phoenicians to the