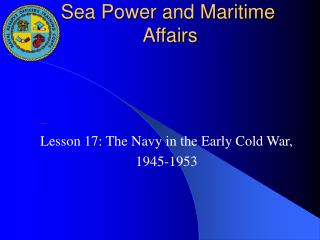 Sea Power and Maritime Affairs. Lesson 17: The Navy in the Early Cold War, 1945-1953. Learning Objectives. Comprehend the development of new strategies and weapons systems, in terms of competition for resources within the DOD and within the Navy., in the High Cold War.

Sea Power and Maritime Affairs - . lesson 14: the war in the pacific, the defensive phase. comprehend the political and

Sea Power and Maritime Affairs - . lesson 2 sea power in the ancient mediterranean world, from the phoenicians to the

Study Guide! - . a court system made up of both federal and state courts- dual court system. authority of both state and