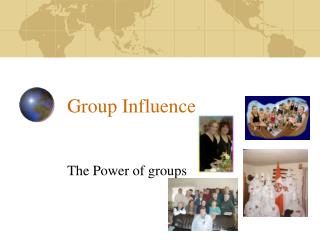 Group Influence. The Power of groups. I. What is a group?. Two or more people who interact with & influence one another. Must be perceived as “us.”. II. Why do groups exist?. Belongingness Provide information Accomplish goals Social Support. III. Collective Influence.

Group Influences - . 1996. what is a reference group?. an individual or group who serve as points of comparison or

Leadership – The ability to move or influence others toward achieving individual or group goals. - Leadership – the

Social Influence - . social influence. how do we influence each other? how are we affected by pressures to conform and

Unit 13 Social Psychology Social Influence pt. 2 - . what do experiments on conformity and compliance reveal about the

Social Influence - . conformity. adjusting one’s behavior or thinking to coincide with a group standard. how did you

Group Influence and Family Decision Making - . group and situational influence. a group is two or more individuals who

Group Influence - . group influence. group: two or more people who interact with and influence one another phenomena of

Chapter 14: Group Influences - . what is a reference group?. an actual or imaginary group which has an influence on a The Marketing Power of the Social Influencer [INFOGRAPHIC] - Think all users are created equal? think again... in this