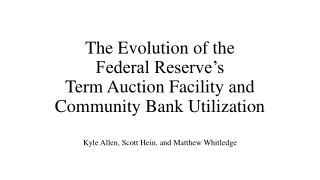 The Evolution of the Federal Reserve’s Term Auction Facility and Community Bank Utilization. Kyle Allen, Scott Hein, and Matthew Whitledge. Disclaimer: As a researcher I come with a lot of baggage.