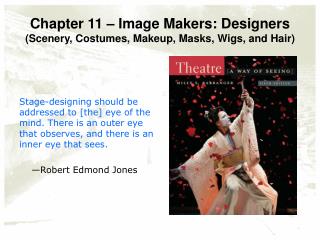 Chapter 11 – Image Makers: Designers (Scenery, Costumes, Makeup, Masks, Wigs, and Hair) Stage-designing should be addressed to [the] eye of the mind. There is an outer eye that observes, and there is an inner eye that sees. —Robert Edmond Jones Chapter Summary

Get 50% Discount on Image Editing Services - You want to remove your images backgrounds, if you are searching best remove

Chapter 14 Processing the Latent Image - . the processing of the latent image produces the manifest image. the exposed

IPC DESIGNERS COUNCIL - . how can we help you and your local chapter be successful?. agenda. ipc history overview

Chapter 12 – Image Makers: Designers (Lighting, Sound, and Technical Production) - . i feel that light is like music.

Why Do Map Makers Lie - . contents. map makers lie map makers don’t know to much info things have changed it is more

Image Compression (Chapter 8) - . introduction. the goal of image compression is to reduce the amount of data required to