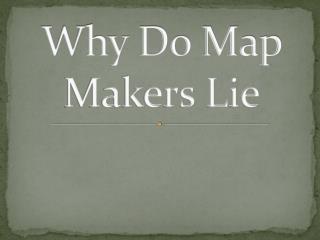 Why Do Map Makers Lie

Why Do Map Makers Lie Map projections - . reference points. in cartography, it is imperative to take into account the spherical shape of the

Map projections - . the dilemma. maps are flat, but the earth is not!. producing a perfect map is like peeling an orange

How to Lie with Maps - . author: mark monmonier. maps are not infallible. &quot;the image on a map is drawn by human

Lying with maps - . propaganda, power and responsibility. where we are going today…. maps as political how to lie why

Map Projections - . from 3d globe to 2d map. as you learned from trying to create your globe, there is no perfect way to

Map Projections - . methods of presenting the curved surface of the earth on a flat map. are all maps created equally? .

Geography its nature and perspective - . how to lie with maps. by bradley reha and victor francia. idea. lying with maps

EMR21: Lecture 7 - . generalization, classification, symbolization the selective interests of the map(maker ) maps (do)

What are maps &amp; what are they used for? - . early mental maps are egocentric. where would you like to live?.

MAP PROJECTIONS - . representing the earth: globes. why is a globe more accurate than a map? a globe is shaped like the

Why do map makers lie? - . by anna aimetti. contents . unknown territories hiding the truth details over the years making