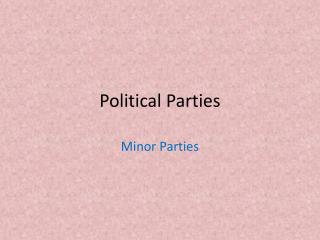 Political Parties. Minor Parties. Objectives. 1. Identify the types of minor parties that have been active in American politics. 2. Understand why minor parties are important even though they seldom elect national candidates. ???.

Political Parties, Income Inequality and Public Policy – 1A - . don’t write down any of the material over the next

FEDERALISTS vs. DEMOCRATIC-REPUBLICANS THE FIRST POLITICAL PARTIES, 1792 - . “jefferson said, ‘the many!’ hamilton

Political Parties in Texas - . govt 2305. in the previous sections we discussed elections and the rules that govern how