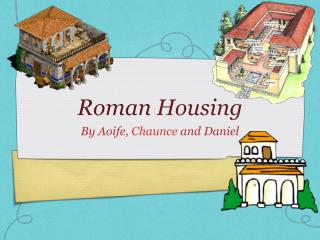 Roman Housing. By Aoife, Chaunce and Daniel. Roman Houses. In Rome there were many different types of houses Rich people had very grand and big houses. Poor people lived in smaller, simpler houses. Family Relationship. The Latin word for family was familia which meant Household. Paint House Miami - We are a leading paint house miami offering top-notch painting solutions to our customers. you can

The Rule of Augustus Caesar - . 1. pax romana. augustus was a clever politician. he held the offices of consul, tribune,

Warm -up - . copy hw grab a red textbook please turn to the page in your notebook called “daily life in the roman

Daily Life of Ancient Rome - . what did the city of rome look like?. rome had about 1 million citizens in rome and 50

Daily Life In Ancient Rome - . by claire schuchard and bianca nistor . what you will learn in this powerpoint about daily

Roman Geography - . students will be able to identify the boundaries of the roman empire at its height. rome. troy.