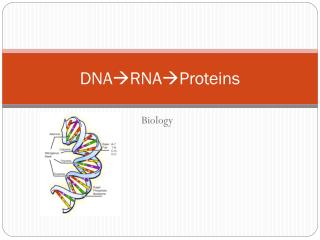 DNA RNAProteins. Biology. REVIEW! What is DNA?. Deoxyribonucleic Acid (DNA) Monomers made up of nucleotides: Nucleotides consist of: A five carbon sugar, deoxyribose Four in it’s ring, one extending above the ring Missing one oxygen when compared to ribose Phosphate group

Proteins - . proteins have many structures , resulting in a wide range of functions proteins do most of the work in cells

From DNA to Proteins - . review (from bj): what are proteins?. proteins are made of amino acids. provide structure

PROTEINS - . proteins. proteins do the nitty-gritty jobs of every living cell. proteins are made of long strings of

V11: Folding of Membrane Proteins - . membrane proteins are in general either helical proteins (see bacteriorhodopsin or

Proteins! - What are some sources of protein?. proteins!. organic molecules - proteins. properties of proteins: proteins

Proteins - . proteins serve many functions, including the following: 1. structure: collagen and keratin are the chief

Proteins - Physical therapy faculty. proteins. biochemistry of . outcomes:. by the end of the lecture, the students have proteins - Proteins. these biomolecules are made from c, h, o, n, and s. the basic building blocks are the 20 amino