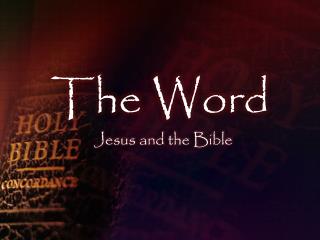 The Word. Jesus and the Bible. "You search the Scriptures because you think that in them you have eternal life; it is these that testify about Me;" (John 5:39). “Whether the Bible is actually the Word of God comes down to one thing – the matter of Christology .” - Dr. R. C. Sproul.

Instructions for families: When introducing a new section: Tell the student the word - Ask them to repeat it back to you

What does the word Promoter mean? - . it is the place at which rna pol ii binds. but the word is incorrectly used to

My Father’s Hands - . by calvin worthington. the word ‘represent’ is made up of the prefix ‘re’ and the base

Language and Definition - . a definition states the meaning of a word. the word being defined is the definiendum and the

Spreading the Word - . so they read distinctly from the book, in the law of god; and they gave the sense, and helped them