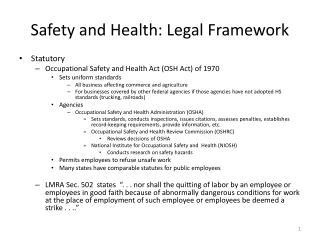 Safety and Health: Legal Framework. Statutory Occupational Safety and Health Act (OSH Act) of 1970 Sets uniform standards All business affecting commerce and agriculture For businesses covered by other federal agencies if those agencies have not adopted HS standards (trucking, railroads)

Occupational Safety and Health - Ensuring worker safety has been one of the ilo’s fundamental missions. the

OHS–Occupational Health &amp; Safety - . what is ohs?. ohs is about the health, safety and welfare of all people in

The National situation on the Healthand the Safety at work - In poland prepared by: małgorzata Żydło danmar computers.

Occupational Health and Safety Code of Practice 2008 - . compliance assistance . codes of practice. how many of you have