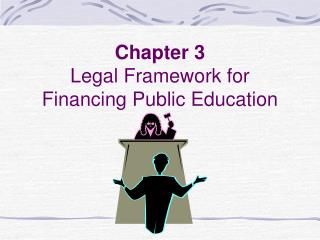 Legal Framework - . make sure you and your visit leaders are aware of and following employer guidance / policy. national

Financing Education Adequately Chapter Two - . what is the purpose of education? read and respond the quote on pg. 31.

EFFECTIVE LEGAL FRAMEWORK FOR PPPs - . by peter stein presented at oecd-seminar on ppps for infrastructure financing