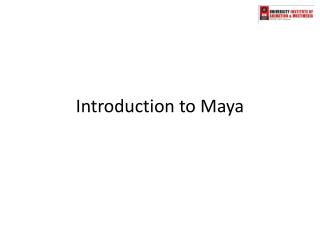 Introduction to Maya. Maya’s Layout. User Interface Elements. In Maya, you can tear off menus to create separate floating boxes that you can place anywhere in the workspace, as shown here. Status Line. 1. Menu Set. 2. Scene File Icons. 3. Selection Mode. An Essential Introduction to Maya Character Rigging - . by cheryl cabrera chapter 7 wrapping up the set up. old man by

An Introduction to Christian Character Development - . by dave batty. what impresses you?. we should not be overly

Introduction to Maya - . main navigation. similar to unity 3d unlike unity it is a right handed coordinate system used to

Introduction to Young Living Essential Oils - . why young living. we believe there is a better way to get and stay