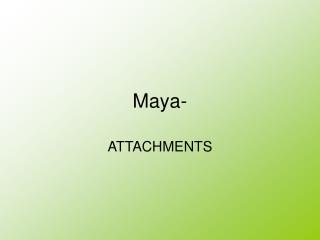 Maya- . ATTACHMENTS. Sikhism does not accept the conventional meaning of Maya-as illusion. The world is not Maya; it is a creation of God and as such, an abode of the Truthful One, or rather a Temple of Divinity. According to Sikhism Maya epitomizes the principle duality. Maya - . warm-up for friday, may 2. imagine you are seeing the person in this photo in real life. who is s/he? where is

Maya - . by e van 5c. for maya, a nepali teenage girl, life in her village was intolerable. living in utter poverty with

Maya - . 200-900 ad. the mayan culture spread throughout southern mexico and central america . it included the yucatan

The Maya - . the maya. the mayans were the first native americans to develop a written language. why the maya?. the maya

Maya Angelou - . by: kirkland back disque middle school. dr. maya angelou. d r a m a ~and~ the a r t s. biographical