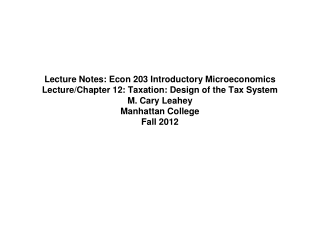 Lecture Notes: Econ 203 Introductory Microeconomics Lecture/Chapter 12: Taxation: Design of the Tax System M. Cary Leahey Manhattan College Fall 2012. Goals. Review of the US tax system—where does the money come from? Evaluation of the efficiency and equity of the US tax system Goals - . understanding of learning disabilities why do we want to help? how can we help? potential pitfalls specific

Goals : - Investigations of spatial and temporal variability of ocean and ice conditions in and near the marginal ice

Goals - . what is a goal?. desired results something to work toward “what do you want on your tombstone?”. what is a

Goals - . goal setting by peter radizeski (with help from others). “a dream is just a dream. a goal is a dream with a

Goals - Section 4.5: using congruent triangles. goals. use congruent ’s to prove other parts are congruent. use

Goals - . provide an overview of the 8260 device allow a quick start of an 8260 design cycle gain familiarity with debug

Goals - Why is this important?. two workers died from asphyxiation due to oxygen

Goals - 3. goals. by the end of this tutorial, we should be able to: classify soils and slope. identify development