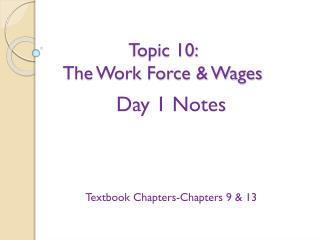 Work, Power, ENERGY and Simple Machines - . qotd: write a list of 10 examples your idea of work. demo : create a work

Meeting the Challenge: Attracting and Retaining a World-Class Work Force 1. Overview and Framework

Work and Simple Machines - . chapter 19 section 3. work . when a force causes an object to move in the same direction of

Change topic - . enough on proximate causes, interesting and a lot of work. basics: stimulus: effector : in between:

TOPIC 5: Work, Energy &amp; Power - . work. definition of work: when a force causes a displacement of an object

Topic 16 Waves - . geol 2503 introduction to oceanography. what is a wave?. energy moving through some medium. how a wave

ENERGY AND LIFE Energy is the force that makes it possible to do work. - Energy conversion processes. energy and life